Any writer of historical fiction has to decide where to position themselves language-wise. I have never dared venture further back than the 18th century and even then I only permitted one ‘La!’ to escape (or should that be ‘scape??) from a maiden’s lips.  I still wonder if it was a mistake.  I’m already slightly regretting the use of ‘maiden’ in the preceding sentence.

But anyway, let’s talk about ‘ye’.  Ever wondered where it came from? Wonder no more.  In olden times, that is to say before them Normans invaded us and inflicted words like hors d’oeuvre upon us, the ‘th’ sound was represented in writing with a runic sign called ‘thorn’.

Scribes got tired fingers scribing away all day so sometimes, in haste, they wrote an approximate version of thorn which looked like a kind of Y, and then, because they were always looking for abbreviations, so they could knock off early and go to ye olde ale house for a pint, they quite often wrote ‘the’ to look like this: 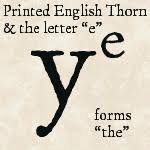 Which practice kind of stuck when printing came in. Instead of making a font for thorn the printers thought ‘ah feck it’ and used the Y.

And frankly, I’m sick of it.