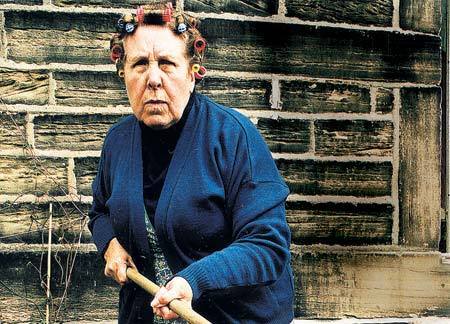 Like Nora Batty I’m in battle-axe mode today. It may be the result of sitting too long doing final revisions. The blood drains down to my ankles and my brain defaults to its factory setting, i.e. irritated by little things. Such as the misuse of words.

Let me be clear (as politicians love to say), I believe language is a living thing, I don’t mind (some)neologisms and indeed I sometimes take linguistic liberties myself, but there are a couple of words that have now been so trashed I feel I must say something in their defence.

Iconic. The lazy journalist’s go-to word for anything that’s famous or fashionable. The Statue of Liberty is iconic, likewise the Taj Mahal. A restaurant is not. It might be famous but it cannot be iconic. Neither are a pair of sunglasses. You could argue that shades worn indoors for some idiotic reason are iconic of Anna Wintour but I don’t think I’d bother. Put the word away, hacks, before it becomes utterly meaningless. Oh. Too late! It already did.

Then there’s awesome. Excuse me while I wipe the exasperated splutter off my computer screen. To be awesome means to inspire awe. A rare quality I think you’ll agree. A pair of shoes cannot be awesome and neither can a burger. I may be particularly sensitive to its egregious misuse since my recent visit to the US where I heard it all the time and the moment that really tipped me over the edge was the following exchange.

No, Sasha. You were not awesome. You were just a girl in a woolly hat on the Downtown Number 5. And actually, even if, for reasons unknown to me, you truly were awesome, it was not your place to say it. So stop it.

The fan vaulted ceiling of King’s College Chapel in Cambridge  – that is awesome.

Right. Got that off my chest. Back to the revisions.